Traveling in the Middle Ages

Travel back to the Middle Ages, between walls, castles, narrow streets, towers, mysteries and legends, villages perched outside of time and historical centers miraculously remained intact over the centuries, protected by UNESCO today. Siena is the city symbol of the Italian Middle Ages, a jewel set in the heart of Tuscany where there are countless masterpieces of art and architecture. As of the most beautiful medieval square in Europe, Piazza del Campo, in 1300 the symbolic heart of Siena, where every year it takes place the Palio, as well as the Torre del Mangia and the Palazzo Comunale which houses masterpieces of Sieneses artists, such as the beautiful Majesty of Simone Martini and the Good and Bad Government by Ambrogio Lorenzetti. Best example of Italian Romanesque-Gothic style, is the Cathedral - the crypt, the Piccolomini Library, the Baptistry and the Museum - is another must see in the historic center of Siena, a UNESCO heritage site since 1995. Close to Siena, there is a small, great treasure of Tuscany and all of Italy. In the Middle Ages San Gimignano enjoyed its most prosperous period, thanks to the fact of being crossed by the Via Francigena. Still retains its appearance two-fourteenth century and 14 of the 70 towers built in the Middle Ages by wealthy families were to characterize the historic center and make unique and recognizable profile of San Gimignano, also called "city of the beautiful towers", the Manhattan of Italy. The village stands on the hill and was declared Patrimony of 'Humanity' UNESCO in 1990. Not so far away, in Umbria, there is one of the most beautiful medieval towns in Italy, Gubbio, so tied to his past as a host, this year it will take place the Medieval Festival. During five days there will be 10 centuries of history (476-1492) between exhibitions, markets, shows and re-enactments. Symbol of the city, Palazzo dei Consoli, a masterpiece of the Gothic style, in the scenic and panoramic Piazza Grande. 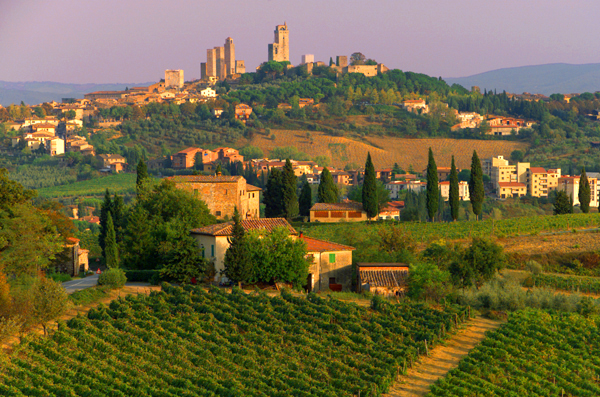 Umbria, a magical and fascinating region in the center of Italy, rich in history and tradition, with its typical products, olive oil, wine. Besides the most famous Assisi, Perugia, Spoleto, Spello, Montefalco, Todi, you will discover its hidden treasures.